Indifference to the Dignity of Work We have all done it. We have walked past a beggar on the street. We have purchased groceries from a cashier whose eyes we did not meet. We have been impatient with a doctor when our appointment time is delayed. Some of us have even mumbled under our breath about a fussy baby on an airplane. What do these seemingly disparate scenarios have in common? These are times when we fail to appreciate the dignity inherent in all forms of work.

For those of faith, we understand that God calls each of us in Genesis 2:15—without burden—to till and keep the earth. This is a duty inherent in who we are as mankind created in the image and likeness of God. By our very nature, we share in the process of creation. Each of us is called to work as a duty to God.

Pope Francis reminds us that work is fundamental to the dignity of the human person. He explains that “work ‘anoints’ with dignity, and that dignity is not conferred by one’s ancestry, family life or education. “We eat with what we earn, we support our families with what we earn. It doesn’t matter if it’s a little or a lot. If it’s more, all the better.”

However, without an understanding of the true nature of work, we can be indifferent to our responsibilities as workers and as beneficiaries of the work of others.

At a certain level, we all know what work is. We all do it. However, for policy makers and those who study work, the United Nations 19th International Conference of Labour Statisticians has established five mutually exclusive forms of work that can be measured:

According to the United States Bureau of Labor Statistics’ 2013 American Time Use Survey (most recent data available), in the U.S., employed persons worked slightly more than an average of 7.6 hours a day during the work week– if considered in the average are those who work on the weekend, as well. This brief snapshot only captures the type of work that the UN describes as “employment work.” However, we all know that when we finish our day’s “employment work,” there is still much more work left to do. Think about a typical day in light of this framework. Before and/or after paid employment work, most of us will make meals, clean and care for a home, care for and transport family members, and volunteer our time and talents to sports teams, schools, churches and  myriad social or community organizations.

We work, and we work.

How should we understand work?

Pope John Paul II, in his Encyclical Letter Laborem exercens (On Human Work), teaches us that work has three dimensions: subjective, objective and social. Each dimension offers insight on not only what work is but how we should approach it.

Why should we care about work?

As people of faith, we should care about work because it is the mechanism for the provision of our daily bread. Not only does our work sustain us physically, but it also sustains us spiritually. It is clear that our wages provide the resources to physically support us. However, what is more challenging to understand is that our work (and how we accept, respect and support the work of others), is  a vital mechanism providing for the nourishment of our spirit.

Together, each human person makes up the Body of Christ. How we interact with each other matters to all of us. Recall the lesson learned in in the parable of the talents in Matthew 25:14-30. Each of the three servants is given a portion (an amount based upon his own abilities) of the master’s assets and is entrusted to be a responsible steward. Two of the three follow the master’s instructions and make productive use of the master’s talents. The third, out of fear, hoards the asset and does nothing with it. The first two are praised and rewarded, and the third is scolded, rejected and punished.

God has given mankind the entire world and all its resources and has endowed us with intellect and reason. God expects us to use our “talents” to care for ourselves, and our families, and the common good. This mandate also means using our own work to help others be more productive and to always be vigilant to not disregard or diminish the work of others.

The Sadness of Indifference.

During a recent press conference in anticipation of the 2015 Lenten season, Monsignor Giampietro Dal Toso, under-secretary of the Pontifical Council Cor Unum (One Heart), shared an important message about indifference that is relevant to our understanding of our indifference to the dignity of work. Monsignor Dal Toso explains that “indifference comes from a lack of attention to differences.”

Indifference can be understood on three levels.

As mankind, we have a duty to work and respect the work of others, whether that work has high or low objective value. Its intrinsic value is derived from its nexus withto the human person doing the work. Work honors the gifts and talents that we receive from God. We are all called to use these talents in proportion to our abilities and resources for our own care and benefit and for that of others.

We know that, through the introduction of sin, the duty of work is sometimes weighed down by pain and suffering. However, in God’s mercy, we have been given Jesus as the most poignant example of how to use pain and suffering for its redemptive power.

So next time we are annoyed by the crying baby on an airplane, we will remember that we are all God’s children, and that God’s work is perpetual in all of us. Let us imitate the patience of the attentive mother and never be indifferent to the dignity of our brothers and sisters. 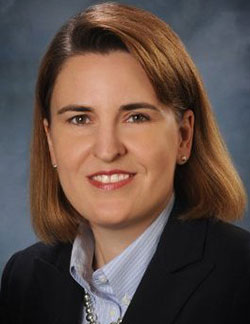 Dawn Carpenter is the Host and Executive Producer of the More than Money podcast. She is also a presenter at the 2018 Principled Entrepreneurship Conference on the topic of Dignity of Work, to be held Oct-3-5.

This is a version of an article that originally ran in the Catholic Standard.